Implico is "Automation Company of the Year"

Presentation of the TankBank Award in Rotterdam

Since last Friday, international consulting and software company Implico is now the "Automation Company of the Year". Managing Partner Michael Martens attended the TankBank T8 networking event in Rotterdam to accept the most recent accolade won by Implico. Implico was nominated for the award by TanQuid GmbH & Co. KG, a major tank terminal operator in Germany. TanQuid was motivated to do so by a project in which Implico implemented a centralized site management system while also automating many of its processes. 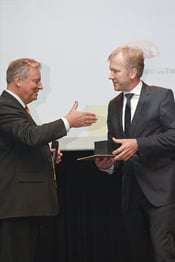 Michael Martens, Managing Partner at Implico, is very pleased to have received the accolade: "A decisive factor for our successful placing here was certainly the many years of experience we have in process automation. This was also the prerequisite for the successful conclusion of the ambitious project at TanQuid. Our thanks go to the Head of IT at TanQuid, Thomas Knutzen, whose nomination actually gave Implico a chance of winning this award."
With the TankBank Award "Automation Company of the Year", Implico adds another accolade to the company's collection of trophies: Implico won Deloitte's "Technology Fast 50 Award" in 2009, the "Telematics Award" from the German trade journal Telematik-Markt in 2010 and, just last year, the "Global Customer Value Enhancement Award" from Frost & Sullivan.
This is the first year the TankBank accolades have been awarded. Winners were selected for a total of seven categories – which, alongside "Automation Company of the Year", also included "Port of the Year" and "Terminal of the Year". The awards are sponsored by the organizers of the regular TankBank event series, an international networking program for the oil and chemicals industry.