Constructive dialogue on OpenTAS / Positive feedback on the event

When offered the opportunity of co-designing the future of OpenTAS, virtually no German OpenTAS customer wanted to miss out. So in late October they gathered at Implico's headquarters in Hamburg for the 2012 white paper meeting, ready to offer their ideas, suggestions and critical feedback on OpenTAS. In an online survey held later, they agreed that the event held by the consulting and software company had been very successful. 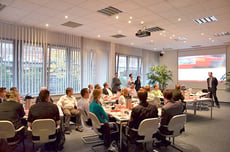 A who's who of the German oil industry arrived at Implico. Among the 25 guests were employees from the following ten OpenTAS customers: Gunvor (formerly Petroplus), Holborn, OMV Deutschland, Tanklager Simon, TanQuid, Total Deutschland, Total Raffinerie Mitteldeutschland, Unitank, Vopak and Wilhelmshavener Raffineriegesellschaft. They openly expressed their criticisms and wishes. The topics most frequently touched upon were user friendliness, the availability of analyses and reports, and communication regarding technical support incidents.
The customers greatly appreciated Implico's openness and willingness to accept criticism. Many of them noted that "we raised critical issues and could be quite frank about our ideas for improvement." The opportunity to interact with other users was also widely praised. One response from the online survey said: "We were encouraged to join in the discussion and debate, and the relaxed atmosphere and large number of colleagues made for a pleasant exchange of views." Another participant said: "I found the event excellent in every way."

The event kicked off the previous evening. Cooking onion pork roast, ravioli and mascarpone crêpes together "was not only great fun but also created an enjoyable atmosphere with considerable discussion."
By the time the 25 satisfied attendees set off for home in the late afternoon of the second day, Implico had received and documented a wealth of suggestions. Solutions Management is now looking into how to incorporate all of this input into OpenTAS so that future releases of OpenTAS are even more closely tailored to the needs of our customers.